PonyCycle is the world’s First Simulated Riding Toy that doesn’t rely on batteries or electricity, but on the child’s own power. Instead of traditional Rocking Horses and Spring Horses which keep the rider in one spot, PonyCycle allows the child to ride wherever they want, making them feel just like they’re on a real horse. By gently bouncing up and down in the saddle, the child makes the head and legs move forward and backward, propelling the PonyCycle forward in a galloping motion. One of the best things about the PonyCycle is that not only does it make a wonderful toy, it’s also a great form of exercise. When children move on their PonyCycle they train a specific group of muscles, meaning that they grow stronger and healthier while having a great time! Riding on a PonyCycle is completely safe. It’s best to find flat, solid ground. Hills should be avoided, PonyCycles don’t have brakes. It’s better not to ride on bumpy surfaces. Never leave a child unsupervised while riding. Wheels do not roll backwards. Make your child’s dream come true and enjoy seeing the joy on their face.

Starshine Inflatable Unicorn Ride-On Hopper Toy: Waddle and friends original pink unicorn bouncy toy with hand pump is quality tested and designed to be durable and long lasting. Pink hopper horse provides toddlers and kids hours of ride-on toy fun. Bouncy animals are the modern day stick horse. Starshine bouncing animal hopper is a shiny magical toy for your little princess. She will use her imagination and jump into a fairytale of her own. Kid Safe: riding unicorn horse is designed and imported by a USA company. All Waddle animal hoppers are made of safe super strong, soft materials. Waddle riding toy is latex free and phthalate free (eco-friendly) vinyl and passes all safety tests and standards. Waddle does not use any harmful chemicals in their products. Age and Weight: bouncy pink unicorn is recommended for children 3 and up. Babies and infants under 3 can bounce with adult supervision. Bouncer unicorn can support anyone up to 110 lbs. Exercise, Therapy, and Motor Skills: hopper toys aid in developing your child’s physical abilities, coordination, balance, and gross motor skills. Many customers have told us it is helpful for children with low muscle tone, sensory processing disorder, any child who needs physical therapy. Inflatable toys can be helpful for children with autism (Autistic) This is a fabulous learning and developmental toy that be enjoyed over and over again. Favorite Kids Gift: young kids love this indoor/outdoor inflatable bouncing hopper. Starshine is the perfect birthday gift or present for holidays. Toddlers love bouncing on Starshine over and over again. Pink inflatable jumping unicorn will bring a smile to your toddler or young child’s face. Gift Box: Starshine the pink bouncy unicorn is shipped deflated in an adorable box. Simply take it out of the box and use the free hand pump to fill it full of air in seconds.

The Scooteroo is the new fun ride-on presented by Little Tikes! This easy to ride Scooteroo helps your child balance on 4 wheels while providing big grip handles for his little hands. Not only is it easy to use, it’s ultra modern in style with cool colors! No child will be able to resist the sleek, exciting Scooteroo!

Our Plush Walking Animals put your little one in the saddle on an endless road to adventure. With your child in the saddle, operating and steering, our animals will actually move forward while your child is on their back! These animals offer fun play that is both imaginative and physical, helping develop both coordination and creative play. Much like an oversized beloved stuffed animal, with their plush bodies, playful tails and friendly eyes. Beneath their soft fur is a hard, sturdy body that’s heavy enough to support the maximum weight. They wear a permanent saddle and metal footrests with rubber grips for extra security are attached to the animal’s body with a heavy-duty permanent metal bar. This very special toy is definitely built to last and will be handed down from one generation to the next. Grip handles are located at the base of the animal’s head; its’ four hooves are fitted with hidden wheels. Our plush Walking Animals are perfect for active play both indoors and out. Designed for children ages 2 to 110. Recommended maximum weight is 120 lbs.25″L x 8″W x 38″H

UFREE-HORSE (Action Pony) is a ride on horse toy can walk without power.
You probably loved to or wished you could ride horses and ponies when you were a kid. It’s just something most kids love to do. Anyone can ride UFREE-HORSE, even you are not kid anymore.
UFREE-HORSE has very similar appearance with the real horse. It uses high quality plush material and leather to make the appearance, covering the sturdy steel frame and complicated drive system. It is the syntheses of stuffed/plush toy, rocking horse toy and moving ride-on toy. The biggest characteristic is that it does not need any battery or petrol power to make it run.
The action pony will run when rider’s body bounce up and down pressing the saddle continually, just like the action of riding real horse.
The horse could not only run in straight line, but also swerve even in the narrow room.UFREE-HORSE can be put in various places as your house, garden, squares, parks, footpath and amusement ground and any flat ground.
UFREE-HORSE also can act as the amusement park ride equipment. Riders can play horse racing game together. Furthermore, it is good fitness equipment for the muscles of waist, abdomen and legs.
UFREE-HORSE is a good toy for both children and adults. It has different dimension and two-position stirrup to meet different peoples’ need from 3 years to adults. It will bring you the feeling of riding real horse. Kids will be very excited to leave their rocking hobby horse and jump on this walkable “real horse”.
UFREE-HORSE will bring the children an unforgettable childhood, and it will bring a happy life to each family. It will be the best gift for Christmas. As the exclusive manufacturer, UFREE welcome the ride on toy dealers and distributors to deal wholesale business.
UFREE-HORSE approved CE (EN71 standard), and USA toy safety standard ASTM F963, tested by SGS, the world’s leading testing and certification company.

It’s Singapore’s National Day today and how appropriate that this female figure is dressed in red and white, our national colors. Happy National Day to all Singaporeans 🙂

This will be an incoming Phicen product – Phicen Limited (Item NO: PL2014-48) 1/6 scale Little Red Riding Hood – Grimm’s Fairy Tales Artistic Interpretation Deluxe Collector Figure. Who doesn’t know the story of little red riding hood, a French and later European fairy tale about a young girl and a Big Bad Wolf? The story has been changed considerably in its history and subject to numerous modern adaptations and readings, one of the most recent being “Red Riding Hood”, a 2011 American dark fantasy film directed by Catherine Hardwicke, produced by Leonardo DiCaprio and starring Amanda Seyfried in the title role. 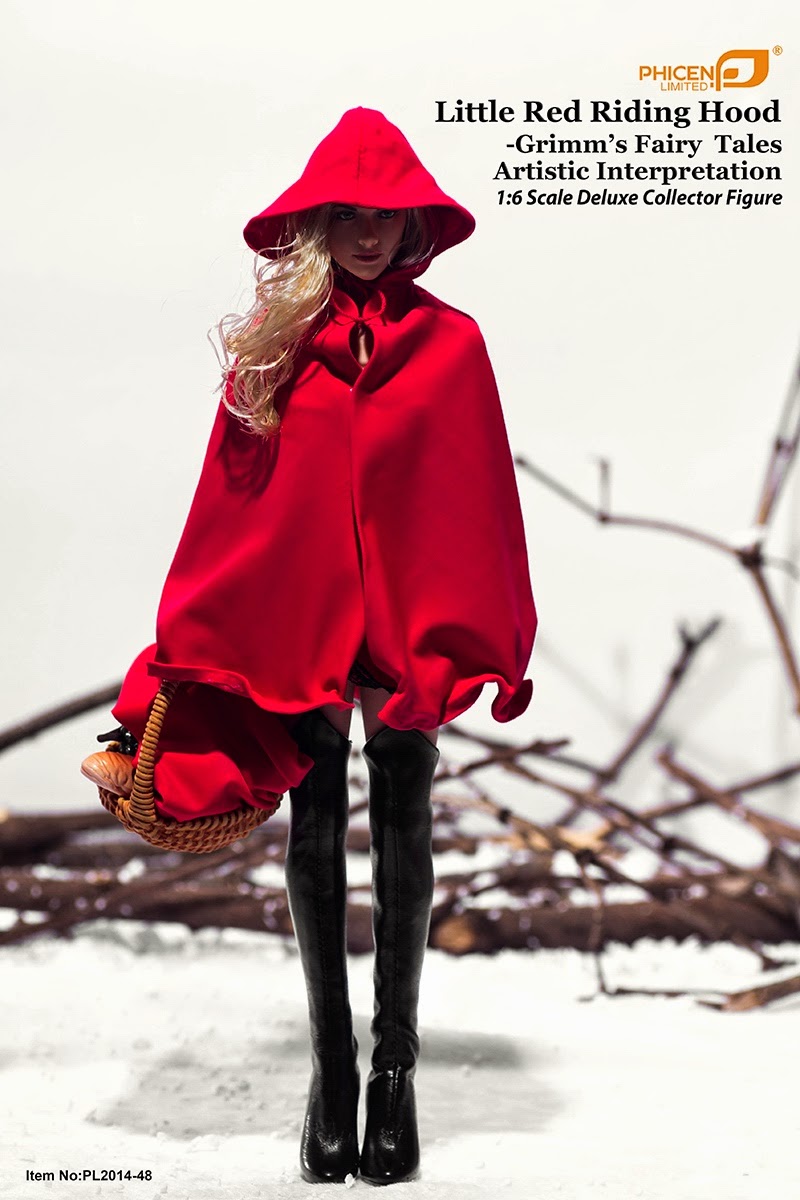 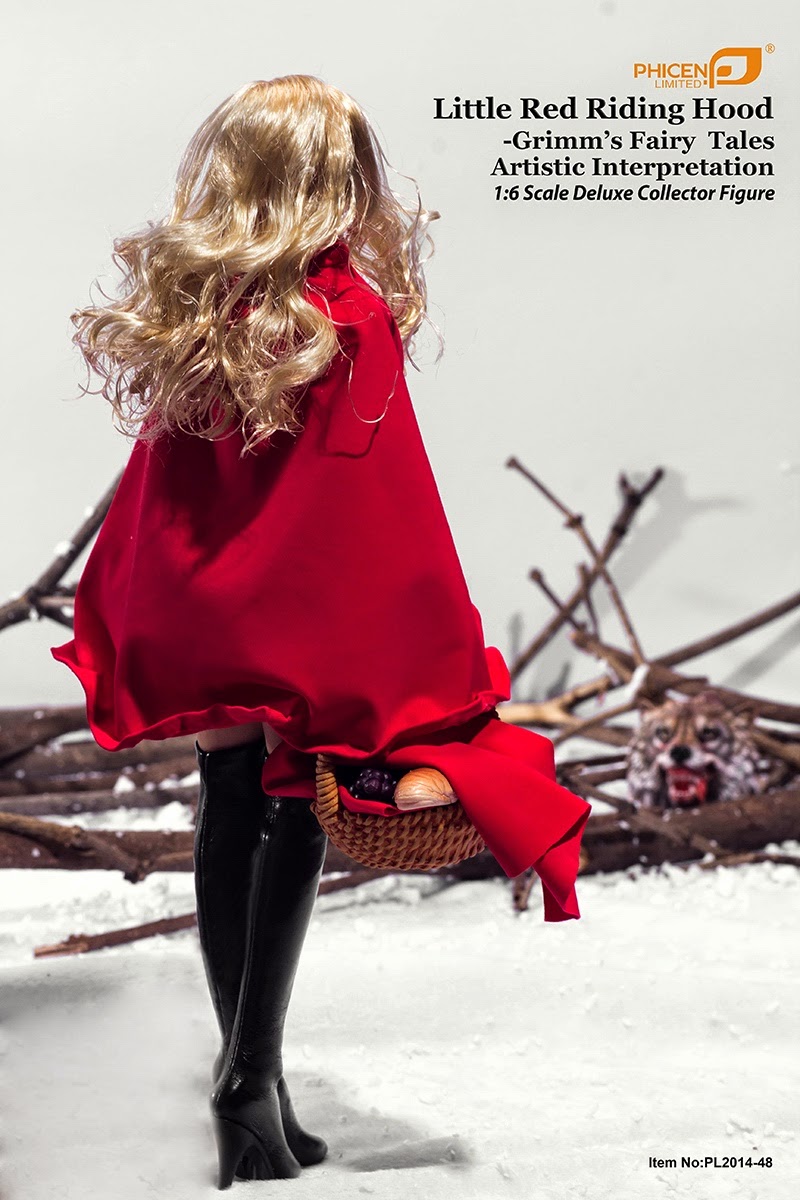 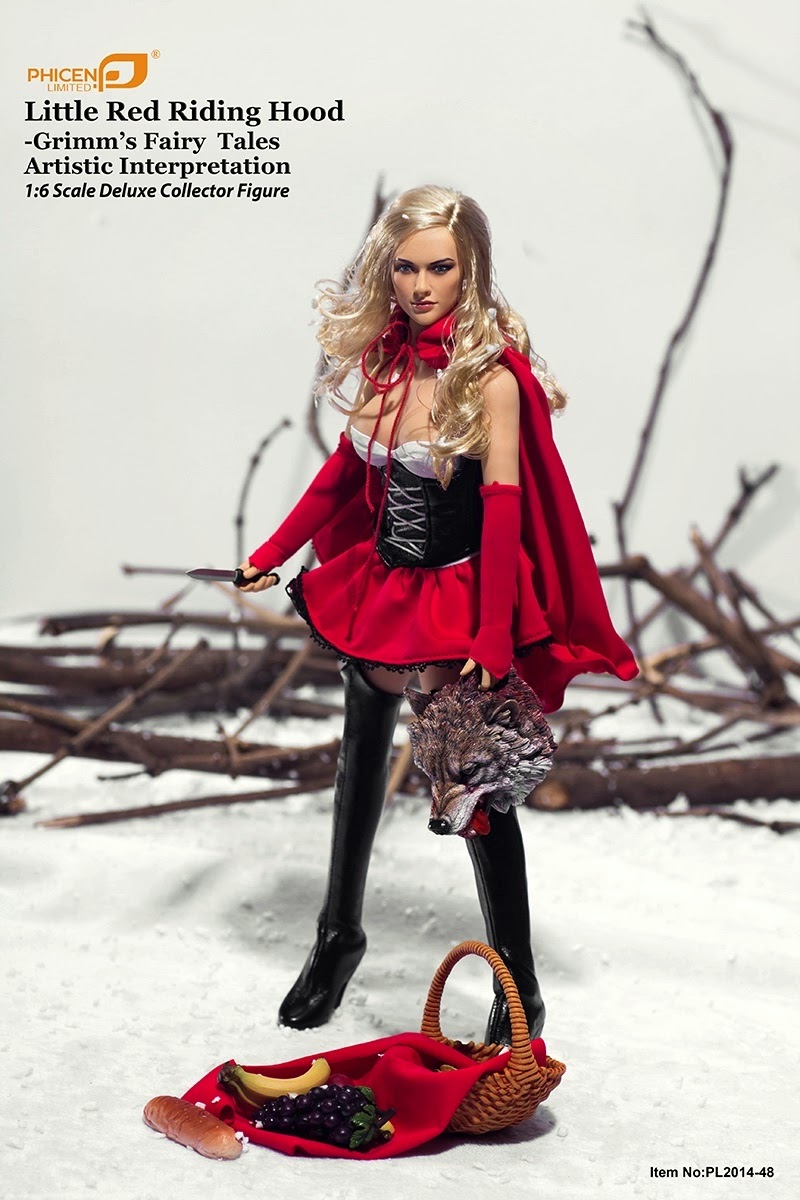 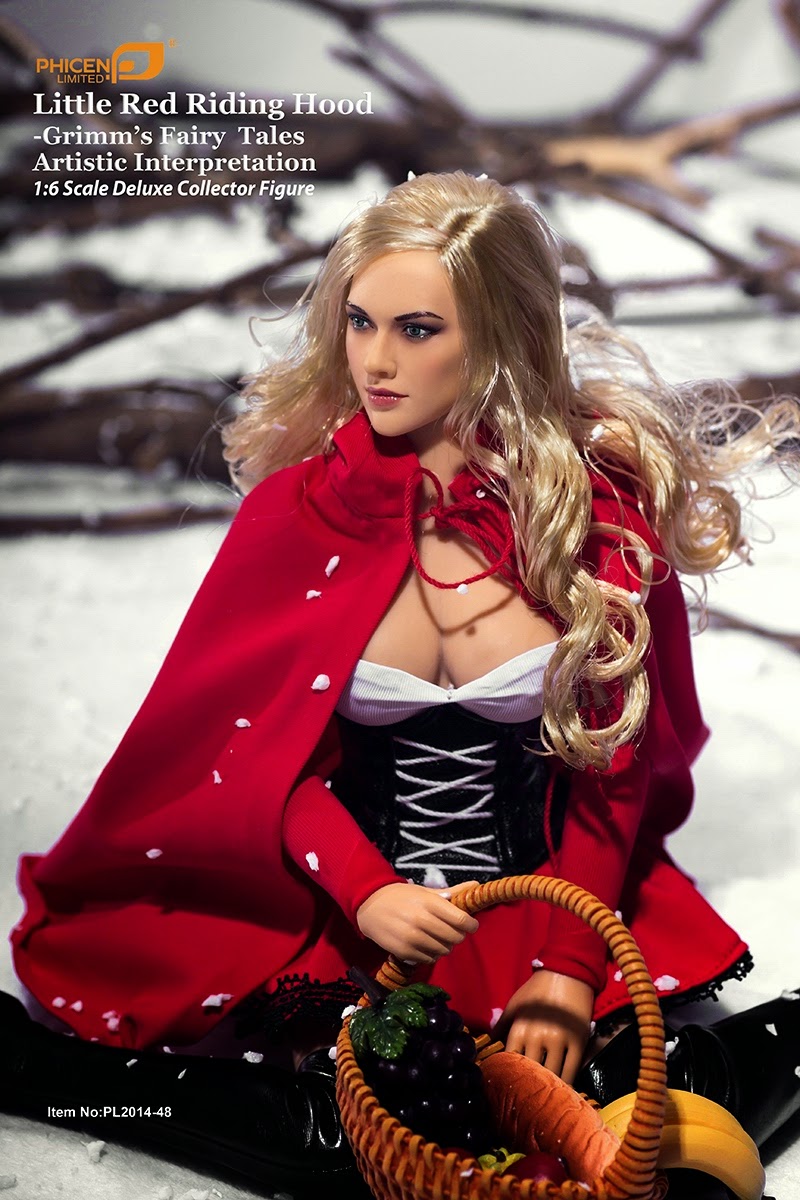 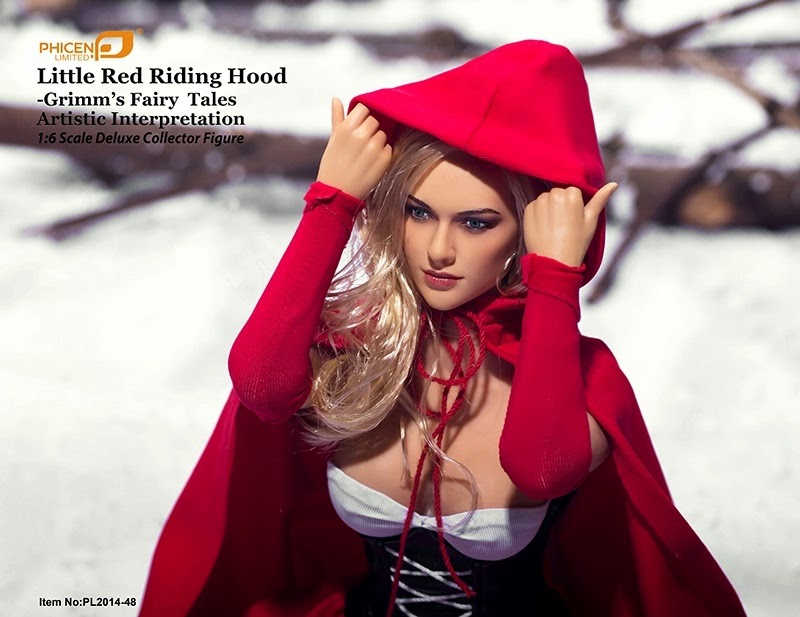 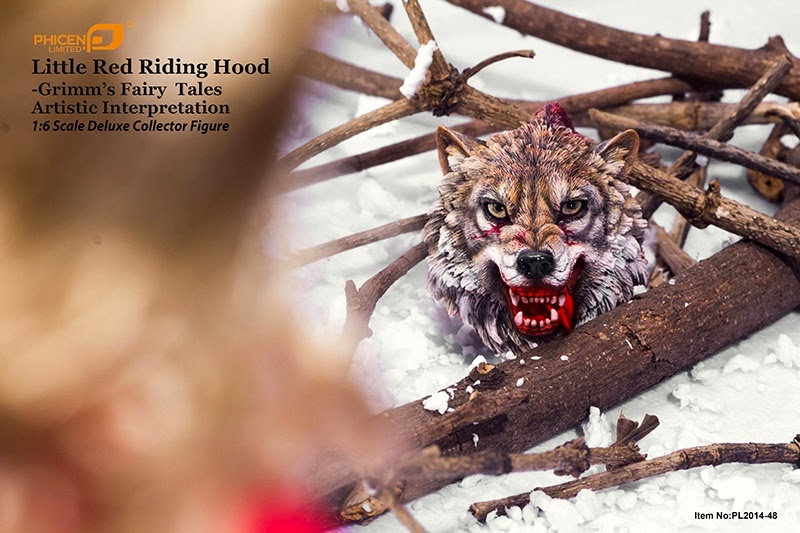 Have you had enough Miku? Of course you haven’t! Overnight, for us at least, at a special NicoNico event, Good Smile Company decided to let word out of two new pieces of Miku that you will tell yourself you cannot live without. For the posers out there, we have the figma of Racing Miku 2013!  For statics, there’s 1/7 Red Riding Hood Miku!

Last time we saw Racing Miku ’13 was at Winter Wonfes. Give it two plus months and now we have the full color prototype. This figma is certainly gorgeous and I like how they went with the suit down and the magenta accents. The translucent hair is a plus, not to mention the cat-ear helmet. I wonder though if they’ll make the helmet actually able to be worn. No word yet on release, but I sense a GSR Sponsorship in her future.

What should hopefully not take any magic to buy will be Max Factory’s 1/7 scale Red Riding Hood Miku. She’s making her debut here at the event and it’s certainly one to look forward to. If you’ve played Project Diva, you should be familiar with the red/white outfit (video included after the jump). She’s just in the prototype stage now, but I get the feeling a lot of people will be happy once the final product’s out there. Just as with figma Racing Miku, there’s no other details at this time. Summer is just around the corner so I’m ready to see how they’ll turn out.