Kong Andri shares with us images and info of his latest and upcoming release: Introducing a “Dia De Muertos” / “Day of the Dead”-themed Skeletoboy Colorway of his OWANGEBOY Resin Statue!

Standing 20cm tall, made in Polystone Resin and finished with Lacquer and Acrylic Paint, this incarnation is limited to only 15pcs, each priced at US$650 (worldwide shipping cost included). Includes

UK artist Whereschappell returns with a second take on Batman. The new version comes more than three years after his original 2016 take on the Dark Knight. While both versions feature gritty versions of the iconic character, the 2020 version features a darker, bolder and more powerful rendition from the physique to his suit including the cowl and utility belt.

Whereschappell will offer his new Batman resin art toy (9.25″)  in five variants (Black/Grey, Blue/Grey, Black/Black, Dark Grey/Khaki, and Dark Blue/Grey). While the release date hasn’t been announced, we do know the new editions will be £89.99 each ($118) from Mahalo Cabin and will ship at the end of May.

For his first release of 2016, Brent Nolasco continues his impressive string of new characters + sculpts. Sitting in a Pretty Daze features a bat relaxing atop a mushroom as a single piece (6.5”). The nice lines and strong details of the sculpt are set off nicely by the large,…

From a long sold out 2D print, comes Tracy Tubera x Mana Studios Walt resin figure! No, not the Walt that imagined up a Mouse. We’re talking about the ex chemistry teacher who went from a clueless ‘cook’ to a “do whatever it takes” kingpin. Mana has perfectly captured all…

From Gaming Heads. Gaming Heads is excited to kick off our awesome range of Doom collectible statues, starting with our Doom: Knee Deep in ice Dead resin diorama. Based on the classic Doom box cover art, the diorama depicts the Space Marine in a life and death battle with demons from hell, armed only with his wits and his trusty sidearm. This is an epic center piece to any Doom collection! The diorama measures approximately 12.5″ H and 17″ W, including the base and comes packed in a foam interior, full-color box with a validation card that ensures your product is genuine. Cast in high quality poly-stone, the statue is hand-finished and hand-painted to exacting standards. The simulated bullet effects are removable, depending on your display preference.

UrbanMedium’s CheTrooper will soon be available in a 18” resin bust! They have plans on having a release in both Atlanta and New York this fall. More progress photos soon to come! Also, stay tuned for official release information.

“Nobody Likes Leonardo” is a three-way collabo between illustrator RICHT and Goodleg Toys, as presented by Streets of Beige, featuring a new TMNT resin bootleg action figure, with an expected drop date in June 2014, so there’s plenty of type to get ready and get hyped!

“Straight from the underground’s gnarliest sewer, babtized in Ooze! Streets Of Beige present a RICHT X GOODLEG TOYS resin toy release. “NOBODY LIKES LEONARDO”, the most toxic TURTLES bootleg the world has ever seen! COMING SOON!!!”

From local DIY-lowbrow arts outfit The PBKs comes “NO GUTS NO GLORY!” resin slingshots, with the above “Mr Invisible” being one of the two colorways scheduled for a drop via their online store come April 1st, 10am +8 GMT.

Be it a triumphant “V for Victory”, or a casual “kawaii”-gesture for an eternal snap, the notion of two raised fingers have a “dangerous” side to them too! Not to mention a hark back to ye days of lode, where “play” was not confined to fingers pushing on buttons on hand-held consoles or mobile phones … Hand sculpted and cast with love, here’s hoping you folks hit your targets dead-center! 🙂 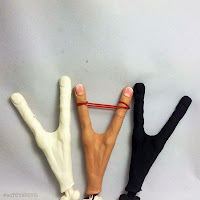 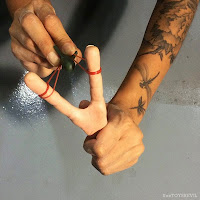 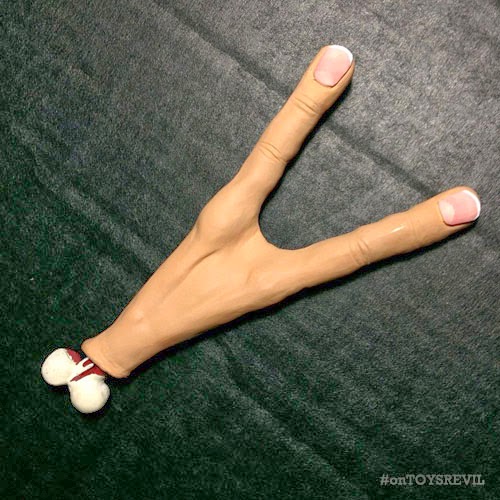 Sinners rejoice, for today we take a look at Diamond Select Toys’ Sinful Suzi Resin Bust. This sculpture of the foxy demon girl was based on Dawn creator Joseph Michael Linsner’s original artwork.

Does she put the hot into hell? Full review after the jump.