DC Comics fans big and small will love this set of seven Batman figures. Epic battles are mere moments away when our hero and his allies team up against some of their most legendary arch rivals. Each figure is highly detailed with iconic emblems and superior articulation for maximum action. Their sculpted hands can grasp the two oversized swords included in the package and other weapons (sold separately). Diorama packaging showcases the battle between good vs. evil and makes this 7-pack an ideal gift. This set includes two versions of Batman, Red Robin, and Nightwing, teaming up against the villains Two-Face, The Joker, and an oversized Solomon Grundy.

LEGO BATMAN 3: BEYOND GOTHAM ALL CHARACTERS UNLOCKED! Today I show you all 150+ characters in Lego Batman 3: Beyond Gotham! Who do you like the best? And dont forget to suggest …

DC Entertainment should have titled this video “Two Hot & Nerdy Babes Play BATMAN: LEGO 3”, ha ha! The fun thing about the game footage is the character skins & vehicles are all related to the ’66 BATMAN TV Series. You can even hear Adam West’s voice every now and then.


I just got these semi-prototype photos recently and I know that a lot of BATMAN Fans out there will totally love them. I Present to you, VINYL VIXENS from Funko! These three Gotham Girls will be available at Hot Topic in the coming months (among other places). The first wave includes Catwoman, Harley Quinn, and Poison Ivy.

Plus, there’s a rumor that more DC Comics super heroines will be added to the toy line. My only regret in posting this is that I don’t know how tall these figures are. But they do look pretty cool and I just might have to get that one of the Catwoman, MEOW! OK, I actually want all three, ha! 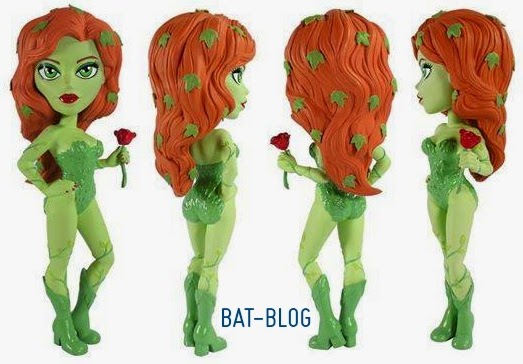 Check out this EXCLUSIVE IGN Video that shares the gameplay for the brand-new LEGO BATMAN 3: BEYOND GOTHAM game. Our favorite LEGO Caped Crusader is at it again, but this time in outer space! Join Batman and more than 150 DC Comics characters in saving the world once again!


This footage was shot at the recent 2014 Comic Con. It shows many of the different characters you can play. It also gives us a great example of the the “Classic 1966 BATMAN TV Series” Batcave is gonna look like! Oh, and yes, they will have a 1966 Batmobile car too!

The game comes out on November 11th in the USA, and then November 14th… Globally!

Television pilots are terrible. They’re rarely indicative of the future of the show. Either through drastic shifts in showrunners, celebrity guest director, or hard swings in characterizations, the ensuing series often pivots in some not insignificant way. For instance, the first episode of New Girl was terrible and the show turned out to be quite fun.

The prominent mutation can usually be attributed, however, to the fact that the pilot has so much to do. It has to set up characters, motivations, and conflicts that will blossom over the course of the season and entire series. It’s full of so much stuff that is doesn’t have room to breathe and luxuriate in personality or subtlety. It’s rare you get a pilot like Boardwalk Empire or Breaking Bad and are afforded nearly feature length time.

That’s why it seemed like a rash idea to pass judgment on Gotham after it’s first go at broadcast. It had a terrible habit of treating the audience like drooling buffoons. Or it had no idea how to play coy, opting to spit on your face instead of throwing you a wink and a smile. It basically hit you on the head with its foreshadowing. (Penny Arcade’s expert skewering is dead-on.)

Gotham continues to do that, opting for an Independence Day-sized foreshadowing rather than a deft silhouette passing by the doorframe. It makes up for it by capitalizing on a rather talented cast (especially with Donal Logue as Harvey Bullock and Jada Pinkett Smith as Fish Mooney) and two hefty scoops of dark and moody, but Gotham has a larger problem that looms tall—even bigger than the signs it puts up pointing to Edward Nygma as the Riddler.

Just to make sure we’re all on the same page, let’s go over quickly what Gotham is: James Gordon is still a detective at the Gotham City Police Department; Bruce Wayne’s parents pretty much just got murdered; and neither Batman nor any of his nemeses exist yet in the mature forms with which we’re far more familiar. It centers around Gordon as he attempts to fight back against the rampant and thorough corruption of the city while parading around big name villains like the Penguin, the Riddler, and Catwoman.

Do you see the problem? There are so few ways to make this work and so many ways to make this fail, and unfortunately, it seems as if Gotham is going the way of the latter. As it currently stands, it appears as if the show is structured to shape up around Gordon’s vigilance and tenacity against the endless, crushing waves of dirty crime and dirtier politics. And there’s no compelling way that works out in the context of the greater Batman mythos.

You see, all of those stories begin and end with Batman. Not that they only ever existed or need to exist while Bruce Wayne is capable of being Batman but that their impact on the city tightly orbits around the caped crusader. Even when we find out the backstory of the Joker or Mr. Freeze, it’s because we know what becomes of them that we care where they started, and what becomes of them is inextricably tied to the Batman’s existence.

Tying the bad guys solely to Gordon’s career at Gotham PD is severely problematic because then it impacts the both the necessity and impetus of Batman’s involvement. Consider that if Gordon is successful, he wholly negates the need for Batman. Even if he doesn’t entirely take down the villains, he can build massive cases that can bring about legal victory through the courts, also nullifying Batman’s utility. What need is there to don the cowl and cape when all of the baddies are already behind bars?

Further consider that if none of these incognito personas à la Edward Nygma or Oswald Cobblepot fully develop into their demented alter egos until Batman arrives in Gotham, then their dastardly deeds weigh fully on the Dark Knight’s shoulders. His coming into being actually symbiotically brought into existence the Riddler and the Penguin instead of leaving them to be a coroner and a garden-variety mobster.

Any amount of driving narrative success from Gordon can only serve to inject doubt into our minds regarding Batman’s future guard of the city. Consider instead that the far meatier story would be Gordon’s golden resolve versus the temptation to fall to underhanded policing. We would, in effect, watch him fall.

We see him at a stalemate and lose butting heads with the seedy underbelly of Gotham. His victories are tantamount to saving lives but rarely thwarting crimes—and don’t even bother integrating the likes of Selina Kyle or Carmine Falcone. It’s demoralizing to him and it beats him down into the ground. Eventually we see the cracks in his formerly solid and taut gaze towards justice.

He stumbles. He’s clearly and understandably tempted to fight dirty. Each season he falls deeper into the delectable bargain of being and corrupt as his foes, spitting and clawing in the name of a safer city. The end state is for him to reach his breaking point just as Wayne returns to Gotham and takes up the mantle of Batman. That cape and that cowl are not only Gotham’s salvation but—more importantly—Gordon’s as well. He shows that Gordon’s faith and Gordon’s actions were not misplaced.

Gotham is an obvious show. It’s not just about it’s on-the-nose references and painful elbows in the ribs about future villains and the like but it’s about the show’s core problem: even without Batman, it still fails to not be about Batman.

Reblogged 5 years ago from feedproxy.google.com

What happens when bricks go bad? Get a glimpse in this brand new LEGO BATMAN 3: BEYOND GOTHAM Movie Trailer that made its debut at the recent 2014 Gamescon event. The Joker is pretty funny in this video. Wow, this animated feature keeps looking better and better!

OK, as it is getting closer to the release date the FOX TV Network has been busy releasing promo material for their new “Batman” TV Series titled, GOTHAM. Here are 4 preview videos that give us a great idea on what the show will be all about. I think it looks pretty cool so far. I hope it’s good!